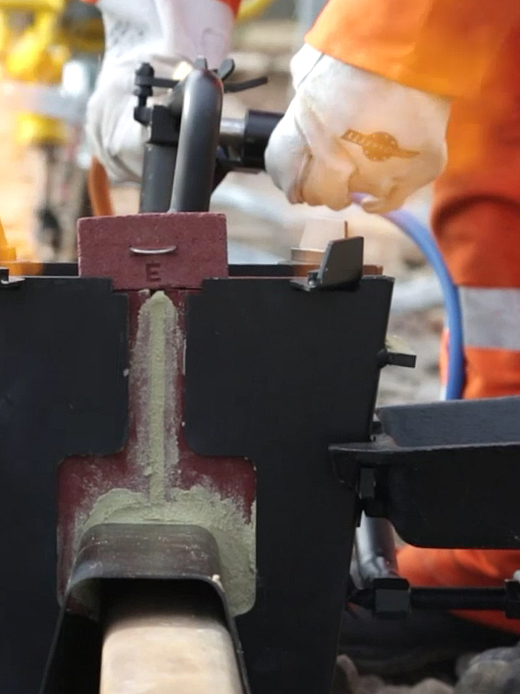 Thermit® welding sets a high benchmark in terms of precision. It requires a sequence of defined processes to be carefully followed before welding can even be started. The moulds need to be sealed to ensure that the hot, liquid steel is distributed solely within the mould and the gap between the rails and does not create any run-out. We supply sand and clay or specially developed luting paste for luting the moulds.

The Thermit® welding process and associated consumables are constantly undergoing a process of optimisation. The formulation of the new grey luting paste has also been improved in terms of its constituents. The paste has a significantly increased durability compared to the red luting paste, and now lasts 18 months. Other impressive qualities include ease of handling and reliability. The new lighter colouring is clearly distinguishable from the darker casting mould, so that even critical points can be located and remedied more quickly during luting. This leads to improved prevention of runout. The new luting paste is available in the usual 1.8 kg containers.

If you have any queries about the new luting paste (item number 363373) please contact one of our Sales team, who will be happy to answer your questions. 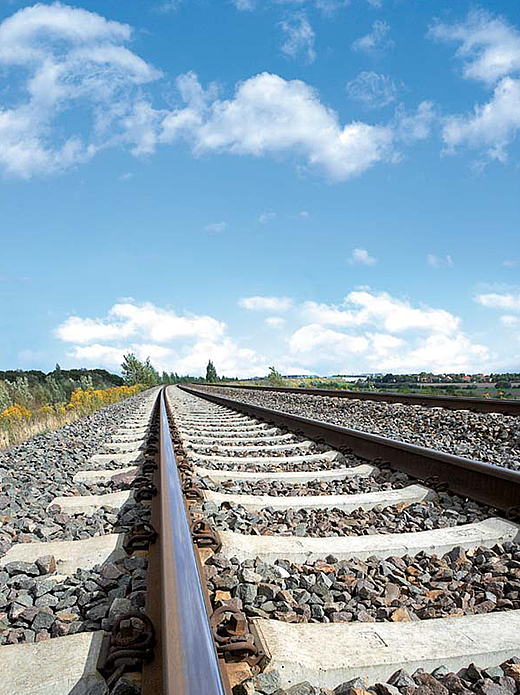 In the Algerian city of Sétif, east of the capital Algier, thousands of people move about the road network every day. Too many, actually. With the quality of their products and processes, Elektro-Thermit is contributing to the burden on the infrastructure of the Algerian university town's infrastructure being lighter in future.

Algeria has been investing in upgrading its infrastructure for years, including the expansion of its electricity networks, railway tracks and even metro and tram lines. Sétif has been able to profit from this as well and is projected to receive its first tram line with 22 km of track and 30 stops with completion in 2016. For the rush hours, intervals of 4 minutes are planned and 5000 passengers per hour are expected.

In order to prove the quality of our products, Yapi Merkezi (Turkey), Yüksel Proje Project Office, the firm commissioned for the welding work, performed a Factory Acceptance Test (FAT) in July of 2015, a performance test in which Elektro-Thermit needed to prove itself as a supplier. Everything from quality management, integrity of the consumables, safety when carrying out Thermit® welding processes to production procedures under actual conditions was tested. The faultless test results convinced Yapi Merkezi of the outstanding quality of our consumables and processes.

We are glad that we could prove ourselves successfully and are now acting as supplier for Yapi Merkezi a second time in Algeria. 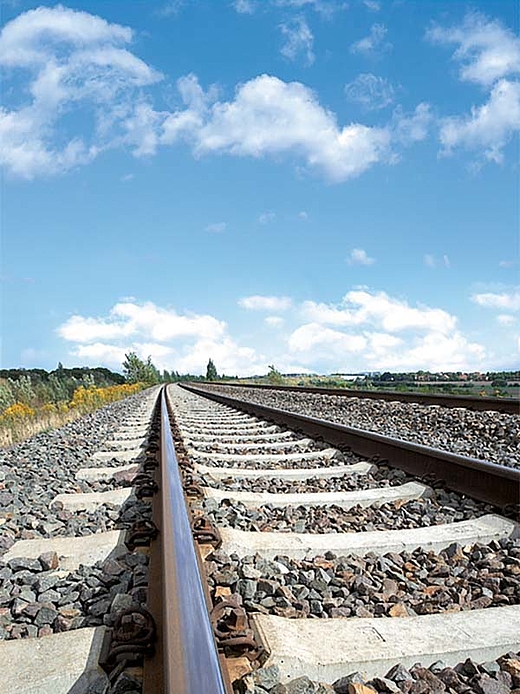 Our technical service staff would be pleased to answer your questions - even those complicated queries concerning Thermit® welding. The following contains a compilation of possible questions and answers.

Alignment, superelevation and effects on the vertical shrinkage of a rail joining weld

In the July edition of the newsletter, the focus was on "Neutral flame during preheating and the consequences of excess oxygen". The following deals with alignment, superelevation and the effects on the vertical shrinkage of a rail joining weld.

Why do rail joining welds sink while cooling?

When viewed from above or below, the cross section of the rail is symmetrical. The left half of the rail's cross-section is the same as the right half meaning that the volume of the welding gap in both halves is equal. The tensile forces in the left and right halves are also equal.

Effect: The welding joint does not move laterally while cooling.

Why are the running surfaces of both rail ends aligned to each other at a superelevated level?

After the welding bond cools and shrinking has stopped, both rail ends should be in a straight line. The running surfaces should form neither "mountain" nor "valley". Later, the wheel should be able to run smoothly over the finished weld.

When does the vertical motion stop?

As long as the left rail, the welding point and the right rail are displaying different temperatures, the welding joint is still sinking.

Why are the running edges of both rail ends aligned to each other evenly and not at a superelevated level?

Because the welding joint does not move laterally while cooling.

What effects are there on the amount of the expected vertical movement?

All operating procedures as well as welder training make mention of this complex topic (excerpt):

The height should be checked after cooling and, if necessary, changed accordingly at subsequent welding points.

The wedges may not be removed until all welding points have cooled completely.

In the following, some typical effects on vertical shrinkage and the required joint elevation that results will be named:

Our technical staff would be pleased to answer any complicated questions you may have about alignment, superelevation and effects on shrinkage. 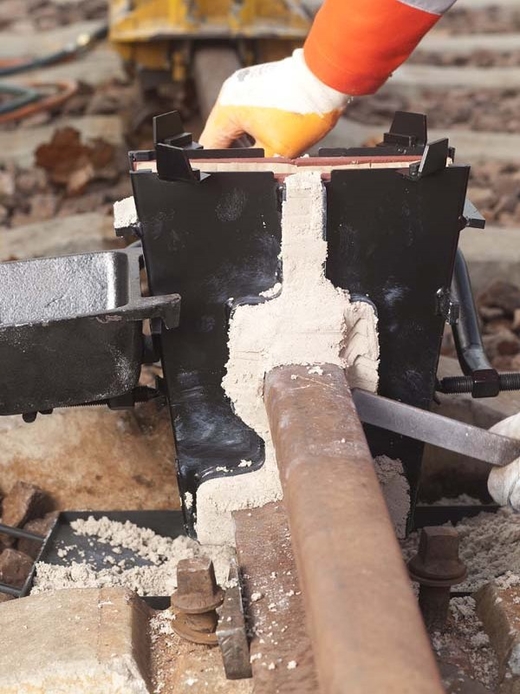 The processing of our consumables into high-quality end products by your trained employees can only be implemented using the current work instructions.

Here you are provided with an overview as to which work instructions have been edited since the last edition of the newsletter. 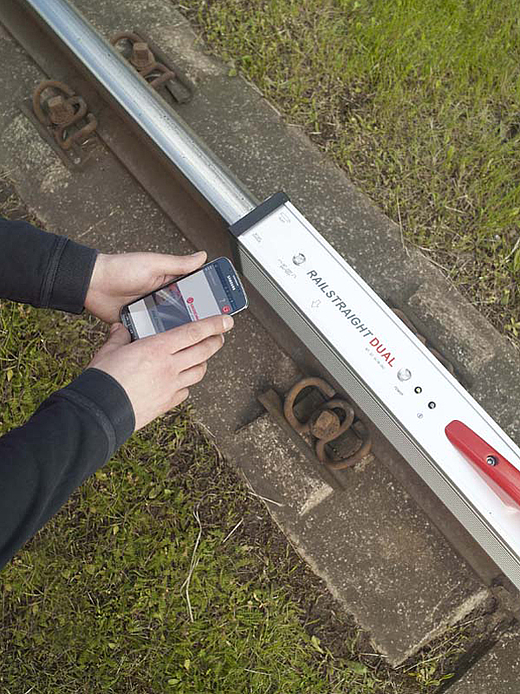 Current publications in the trade press 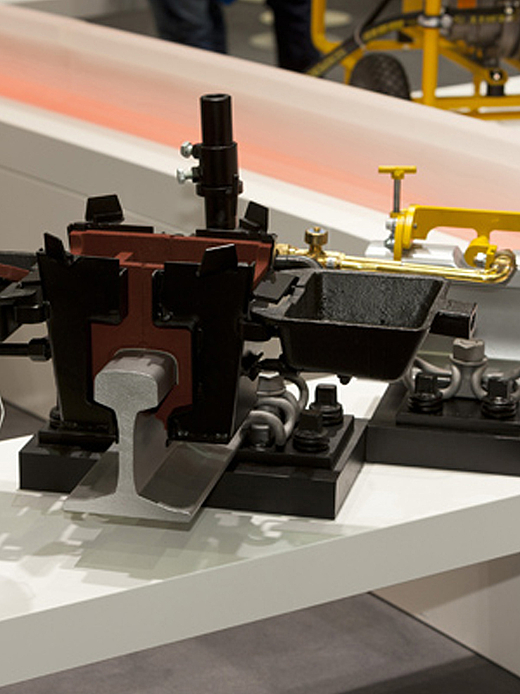 Elmia Nordic Rail is the largest and most successful trade fair for railways in Scandinavia. In 2015 Elektro-Thermit GmbH & Co. KG will be present in Jönköping, Sweden with its own exhibition stand – this time together with Triple-S-GmbH, a system provider for geothermal point and surface heating. Visitors will be presented with the ideal opportunity to speak with our experts about the newest products and services in tract superstructure, including Thermit® Head Repair, RAILSTRAIGHT and the magnetic barrier.